What Kind of Fanatic Watches 22 Marvel Movies in 58 Hours? THIS Kind. Discover why in my article published by MoneyInc.com (extra multimedia below). 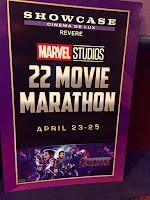 “I’m ready for my Nerd aneurysm” declared Lyska Benitez as she arrived at the Showcase Cinema de Lux in Revere, Massachusetts on Tuesday morning April 23. Fiddling with the settings on seat F12—her home for the next two and a half days—Lyska arranged her neck pillow, spread out her “22 Movie Marathon” Marvel Studios branded blanket, and sipped from her bottomless coffee mug. As the theatre lights dimmed and the Marvel Studios logo appeared on screen, a loud cheer and applause resounded throughout the sold-out cinema. So began our 58-hour, 22 Marvel Movie Marathon.

Over the next two and a half days, we traveled to distant galaxies (and much closer bathrooms), through different dimensions (and the always-open concession stand to refill our Avengers-branded popcorn tubs and soda cups). We kept our bodies clean using showers provided by the Cinema and our minds pure with morning Yoga classes. Thus sustained, we traveled alongside the characters of this visual epic, with whom we loved, lost, laughed, cried, died and were brought back to life.

Culminating our journey with the nation’s earliest showing of Avengers Endgame (Thursday at 5 pm), Marvel Movie Marathon fans illuminated both why the Marvel Cinematic Universe (MCU) has become the highest-grossing film franchise of all time (Earth time, that is) as well as the intense cult-like commitment and loyalty the MCU brand inspires. 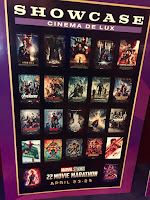 Before Avengers Endgame became the only film in history to gross more than $1B in its opening weekend, 12 Showcase Cinemas in North America (11 in the U.S. and one in Canada) screened a Marvel Movie Marathon for the most dedicated Marvel fans. Geek adjacent, I attended New England’s sole venue, the Showcase Cinema de Lux in Revere.

Reflecting Thanos’ determination to secure the Infinity Stones and Dr. Strange’s time-altering magic, Marvel Movie Marathon attendees bent their personal time and space to be among the first Americans to see the final MCU installment, Avengers Endgame. The admission price of $90 was a pittance for Marvel fans who have for over a decade invested significant time and treasure in the brand.

Visual storytelling junkies, Marvel fans “geek out” by watching the movies repeatedly. Each time catching something they missed before, repeated viewings enhance their knowledge of the MCU and increase their affinity for the MCU brand.

“I grew up watching Iron Man, Hulk and Captain America,” Lyska shared after Thor: Dark World, our 8th movie, which ended before dawn on Wednesday. 20-30 minute breaks between movies became informal debriefing sessions for fans, during which they shared their MCU knowledge and good-naturedly argued the powers of each superhero and supervillain.

“I don’t see this as 22 separate movies,” explained Lyska, who declined to share her occupation. “It’s actually one story that plays out over 58 hours. Sharing this unique experience with people who feel the same way is really meaningful. It’s almost like how these superheroes who didn’t knew each other came together to form The Avengers.” 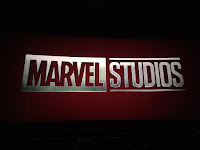 For the most committed Marvel fans, this isn’t a brand. It’s a lifestyle. They identify with specific heroes in the Marvel pantheon, choosing those who reflect their personal ethos. Studying and citing their hero’s respective backstory, most know more about made-up history than real-life history. They buy and proudly display their heroes’ Marvel-branded merchandise. While some can’t name the planets in our puny solar system, most know where Vormir, Knowhere, Morag and Asgard are and can tell you what happened on those planets.

“These superhero movies have fundamental human elements embedded so they connect with people of all demographics and all ages,” said Mark Malinowski, VP of Marketing for Showcase Cinemas, which is owned by National Amusements based in Norwood, Massachusetts.

Those human elements fuel MCU’s appeal and popularity, Malinowski explains. “People have evolved alongside the film series. They identify with the characters; they’re committed to the characters and engaged in their stories. Being here for this movie marathon is one way they show their commitment. For many people here, this is a Bucket List item.”

This fan commitment and brand loyalty has forged a cash Infinity Stone for Marvel, which Disney bought in 2009 for around $4B. Considering MCU’s profits alone, Disney’s purchase price—which some market experts at the time thought excessively high—appears now to be a bargain.


While revenue matters to Disney shareholders and corporate execs, it means little to superfans like Lyska and others. For them, how much the movies make pales in comparison to how much they mean.

About 45 hours into the Marvel Movie Marathon, at 4:30 Thursday morning, I caught up with Christian and Ladue, two young electricians from Newton, Massachusetts who were taking a vape break. (Attendees consumed coffee, energy drinks, cigarettes and vapes to stay awake for the marathon). Lifelong friends, Christian bought two tickets to celebrate Ladue’s 21st birthday.

Reflecting on the experience, Ladue said: “I first saw Iron Man when I was nine. I know it sounds crazy, but I’ve learned a lot from these characters,” Ladue admitted sheepishly. “I feel like they’re family. I mean, I know they’re made up characters but the stuff they go through seems real to me because I go through similar stuff.” “Yeah, but you’re just a puny Terran,” quipped Christian. “Seriously,” he said, “our folks and friends think we’re crazy, but we’re committed. Plus, this is a once-in-a-lifetime opportunity.”

Sipping coffee nearby, Security Worker Joe Grant, 25, overheard the exchange. “I’ve been here the whole time, but I’ve been in and out of it for the last two movies. I’ll make it. I have to,” he says, more to convince himself than us. “I’ll be fine. A couple energy drinks and some more coffee and it’ll be time for Endgame. There’s no place else I’d rather be.”


The uniqueness of a Marvel Movie Marathon reflects Showcase Cinema’s rationale for holding the event, despite immense logistical considerations. Malinowski elaborates: “We’re making it memorable. We’ve brought in showers and we’re providing soap and towels. We’re offering Yoga classes in the morning, discounted concessions (22% off, keeping with the theme) throughout the marathon, and branded coins and posters that may one day be valuable given the limited number of attendees.”

Concessions were available throughout the movie marathon: Attendees washed down 200 oz. tubs of popcorn with soda refills, coffee and water; ate breakfast wraps in the morning and pizza, chicken tenders and nachos throughout the day.

“These people are nicer than most who come here,” said PJ, a Concessionist who worked a double shift from Tuesday afternoon through Wednesday morning. “It’s a cool vibe, especially working here after we normally close. I feel as if we’re all in this together. It’s like a community, and I’m here to feed the community.”

As the marathon reached its apogee with the 5 PM showing of Avengers Endgame, I caught up with Malinowski. While working with theatre staff to prepare for the public opening, he said, “I’m amazed by the number of people who’ve stayed for the entire marathon and lived here for three days. One fan I spoke with has slept only three hours since Tuesday morning; another couple drove down from Maine in a camper. Everyone with whom I’ve spoken says it’s been an amazing, once-in-a-lifetime experience.

“As fulfilling as this has been for our fans, it’s been incredible for us as a company,” he added. “It’s been fun to see how fans have bonded and connected through the Marvel universe. That’s why we have events like this.”

The Marvel Movie Marathon’s appeal shows the extent to which brands like the MCU inspire loyalty, devotion, and long-term commitment: By creating, building and sustaining emotional connections. If this story doesn’t convince you, you’ll see a similar phenomenon in December, when Disney-owned Lucasfilm releases “Star Wars: The Rise of Skywalker.”
Posted by The Hired Pen at Wednesday, May 01, 2019