Since I started playing soccer with a bunch of Chinese guys, I've been exposed to a lot of Chinese culture. Last weekend's game was noticeably short on players, so I asked one of the regulars where everyone was. He said that many of the other regulars had traveled to China to visit family during Lunar New Year. 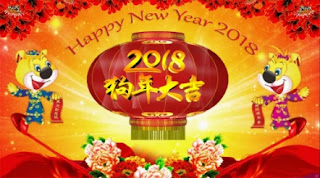 He explained that in China, travel leading up to Lunar New Year represents the largest seasonal human migration. This piqued my curiosity... hence this post, which I hope you find illuminating and educational.

The Chinese regard the dog as an auspicious animal: If a dog happens to come to a house, it symbolizes the coming of fortune. According to Chinese legend, the invincible God Erlang used a loyal wolfhound to help him capture monsters. 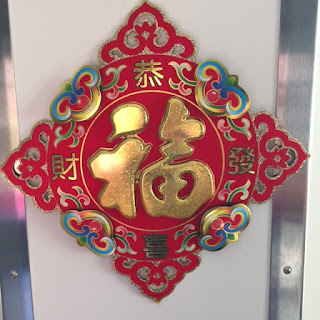 During Lunar New Year, celebrators usually wear red or other brightly-colored clothes: The color red symbolizes good luck, which also acts to scare away spirits of bad fortune (just as firecrackers would).

Like most cultures, food is an important part of the holiday. Different dishes/food symbolize good fortune: For example, having oranges in a mound that represents a mound of gold, or spring rolls symbolizing gold bars. Traditionally, in the first five days of the New Year, people eat long noodles to symbolize long life. On the 15th and final day of the New Year, round dumplings shaped like the full moon are shared as a sign of the family unit and of perfection.

Instead of exchanging gifts, elders give the younger generation money in lucky packets (Lucky Money).  It is believed that if the children keep their Lucky Money from their parents under the pillow over New Year's Eve, this translates into praying for their parents' longevity.

The typical New Year’s greeting in the subject line, above, means: "May you come into much riches!").

Check out this daily guide for what celebrators might do each day of the Lunar New Year.
Posted by The Hired Pen at Wednesday, February 14, 2018 1 comment: